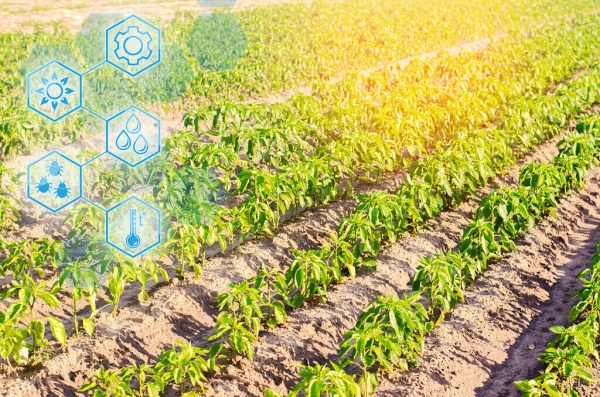 It is possible to think that eggplant, brinjal, is not quite the most important thing to worry about in the course of economic development. It’s probably true to think that way as well despite the many delicious manners in which it can be consumed. However, some work just done in Bangladesh does provide us with an excellent example of how economic development works. The secret being that stuff gets produced using fewer resources. In more formal language, productivity increases. And that, really, is it.

The detail comes in how productivity is increased and that’s obviously more complex. But our whole game in making ourselves richer, creating, and enjoying that economic growth, is that productivity rises. Once that happens we are, by definition, richer, and the economy is growing.

The detail here is a genetically modified form of brinjal, using the same protections against insects as the Bt corn and Bt cotton we might already be aware of. The result is: “Increased yields by 51% and reduced pesticide costs by 37.5%. Bt brinjal farmers marketed more output, sold at a higher price, incurred lower input costs, and, consequently, had higher net revenues (by 128%). Farmers growing Bt brinjal and who had pre-existing chronic conditions consistent with pesticide poisoning, were 11.5% points less likely to report a symptom of pesticide poisoning and were less likely to incur cash medical expenses to treat these symptoms.”

This is pure, joyous, economic growth. In order to gain any particular amount of brinjal, we need to use fewer resources. Those higher yields mean that we need less land per ton of production. Less pesticide is used -- and fewer farmers die of course, always a bonus. If we have to use less land, pesticide, farmers’ time and life, to grow the brinjal we desire then we have those resources left over to grow something else we might desire -- like the garlic to make it all taste of something.

Alternatively, if we were suffering from some shortage of brinjal, now we can have more of it without having less of anything else. We are richer, as a community, because we now have the same amount of this one vegetable and more of other things, or more of this and no less of those other things.

As I say, this is pure economic growth from raised productivity.

We have other examples out there. Of course we’ve got the example of the whole world gradually getting richer over time from this same process but detailed, observable, examples too. My favourite is how the mobile phone drives growth, the example being sardine fishermen off Kerala. Boat to boat, or even shore, radios were too expensive. Meaning that boats needed to roam near randomly to try to find shoals. No one really knew who had landed what at each local port, leading to dearth at some, glut at others, on the same day. The mobile phone arrives and now that communication can be done. Observed shoals can be communicated to friends who can partake of the easy fishing.

The costs if diesel and time reduce. The catch can be landed where people really want it, leading to better prices and less waste. The end result was more fish in the sea -- less needed to be caught to sate demand. At the same time, prices on land fell and fishermen’s incomes rose. Pure, glorious, economic growth from technological development increasing productivity. At which point two points we can and should take from this. The first is that growth comes from using less of something. Either that means that with the stock of what we have we can make more of it, or alternatively, we can divert that excess off to making something else. The most common mistake made with this is over jobs, employment. Politicians are always -- OK, too often at least -- touting their latest plan to enrich the country by claiming how many jobs will be created.

But a job is a cost of doing that thing. We gain growth from raising productivity, which means having to use less human labour, having fewer jobs doing that thing. It is, for example, entirely true that solar power creates more jobs per unit of electricity than a coal-fired power station. There are also all sorts of reasons why we might prefer solar, climate change, foreign exchange costs of coal, and so on, but the jobs part is a problem with solar, not a benefit. Because this now means that we’ve less human labour to do all the other things we’d like to get done. The second is that ease of doing business ranking that comes out around this time each year. Where Bangladesh is normally some small fraction above the bottom of the listing. The problem is bureaucracy often enough. People have to stand around, or in line, to gain a permit or permission to do something. This is the opposite of productivity as the people standing in line can’t be off somewhere doing something, making or producing something.

That is, we can increase productivity -- as above make ourselves richer, enjoy pure economic growth -- simply by abolishing large parts of the “Babu” Empire. That is, if we reduce the number of permits, permissions, and applications for them required to do something then more will get done -- we’ll have more of that pure and joyous economic growth. Plus, it will be fun turning the bureaucrats out of their offices and seeing if they themselves are capable of doing something productive.