OP-ED: The Best Way To Solve The Hunger Problem Feed Those Hungry Today 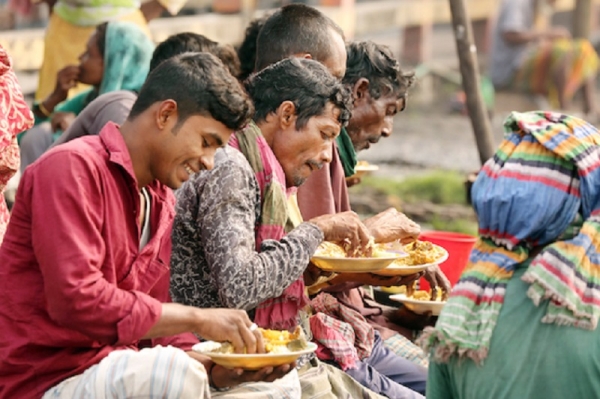 The longer-term solutions are being dealt with, are happening. What remains is the hunger happening right now, something that is best solved by simply feeding the hungry a plate of food

That no child should go hungry seems a reasonable enough injunction. As this newspaper reports, this is a result that is not always met in Bangladesh. The question, therefore, becomes what should we be trying to do about it?

It used to be true that substantial numbers of people simply did not have enough calories to support life.

Starvation, whether an individual tragedy or a national one as in a famine, has been a constant accompaniment to human history.

We have, largely enough outside times of war, beaten that particular horror. Undernutrition and malnutrition still exist though. Perhaps not enough food and certainly, for many children, not enough of the right types of food.

This shows up as a variety of diseases. A lack of Vitamin D leads to rickets, something fortunately not all that common in the sunshine of Bangladesh.

A lack of Vitamin A is a common cause of childhood blindness, iodine deficiency causes goitre in pregnant women and mental damage to the child. Some of these we know how to deal with and largely do deal with.

That last is prevented by simply iodising the salt supply in the country, something that is being done.

Vitamin A though has always been more of a problem in a rice-eating culture -- there is none in the standard varietals of rice.

In fact, in none of the edible ones unless someone works out how to put it there.

Thus, the development of Golden Rice, something which Bangladesh has been at the forefront of bringing into use.

The problem here has been fools from richer countries insisting that poor people -- whose children are at risk of going blind -- may not have the cure for that problem.

For adding the beta carotene (the thing which our bodies make into Vitamin A) to the rice is done through genetic modification.

Therefore, organisations like Greenpeace, which are against GM in any form whatever, are against this cure for the blindness of millions of children a year.

The kindest thing we can say about this is that they are making the perfect the enemy of the good.

Perhaps GM is a bad idea -- I don’t think so but there we are -- and we shouldn’t do it. Or maybe big corporations should not be involved in the food supply system, another complaint.

Or there are other ways of gaining this essential vitamin, through the eating of other foods. All those could possibly be true.

But we do still have this problem and those other solutions are not working; Golden Rice does.

Of course, if we are being unkind, we could point out that the demand is that the poor continue to suffer to preserve the moral purity of people in rich places.

That is much closer to my own view but again, there we are.

This though is only the middle part of a three-stage process. Start again from the beginning, there are hungry children out there. What are we going to do about it?

In the long term, there is only the one solution and that is economic development.

My native Britain is not the richest place on the Earth and certainly has its occasional problems, but the one about food and children is that they are getting too much of it.

The current complaint is that one-third of children are obese -- something that does not prove a lack of food.

Vitamin A is not a problem, nor iodine in the diet. The Vitamin D problem is confined to those from warmer climes who come to live in our sunshine deprived northern fastness.

Pale skins really did evolve to make the most of that limited sun, the very thing that stimulates the production of that essential vitamin.

Fortunately, Bangladesh is already doing most of what can be done about that -- the 5 per cent to 8 per cent GDP growth rates, near as fast as any country has ever managed, of the past couple of decades, are proof of that.

This just leaves the short-term actions that we might take. Religions and morals do differ around the world, but most such systems include the injunction to feed the hungry.

So, we should feed the hungry then. That long-term solution of growth is being worked upon. That medium-term one of increasing the effectiveness in the nutrition of the food supply is also under way. So, the thing left is to feed those hungry today, feed them this day.

I myself aid “1 Taka Meal,” “Ek Takay Ahar”. I mention this not to insist that you should also, rather to point to the base idea.

Those longer-term solutions are being dealt with, are happening. What remains is the hunger happening right now, something that is best solved by simply feeding the hungry a plate of food.

This does not have to be organised at all, let alone in any grand or governmental manner. Simply cooking more food and giving it to hungry people reduces hunger.

We can also, when we do this, console ourselves with the knowledge that we are doing rather more than Greenpeace.

We are out there actually solving the problem while they whine that the problem should not be solved, at least not this way. But then, being better than Greenpeace is a very poor ambition, isn’t it, it being so easy to achieve?