IN PHOTOS: How Bt Brijnal Made Bangladesh A Global ‘Role Model’ 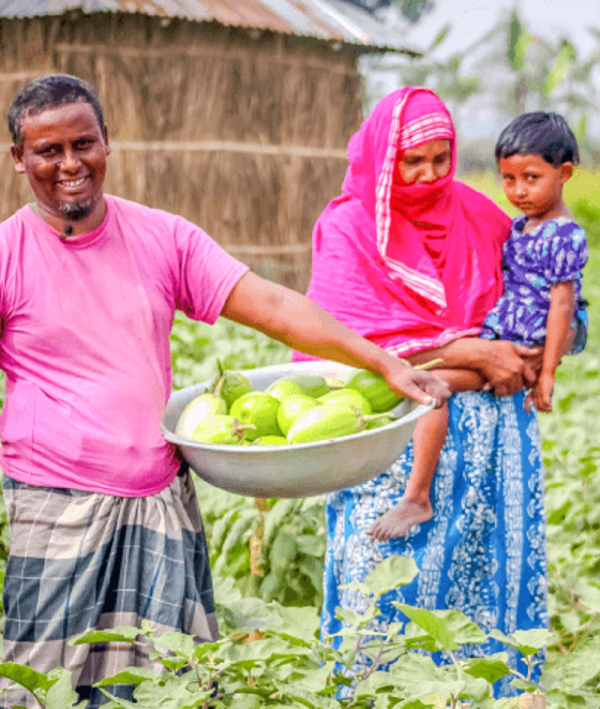 Brinjal — also known as eggplant, aubergine and talong — is a very popular and important vegetable in South Asia. However, it is subject to frequent and intense attacks by the devastating eggplant fruit and shoot borer (EFSB). The pest is traditionally combatted through the use of potentially dangerous insecticide sprays, but Bangladesh has found a better approach. As part of its efforts to feed a population of 165 million people, Bangladesh has approved the cultivation of Bt brinjal, a variety that has been genetically modified to provide effective protection against EFSB, with the need for pesticides dramatically reduced or eliminated.

Since entering the market in 2014, Bt brinjal has helped smallholder farmers in Bangladesh achieve higher yields, a 60 percent reduction in pesticide costs and a six-fold increase in net returns. The crop has been so successful that the USDA Foreign Agricultural Service recently released a report that hailed Bangladesh as “a role model of acceptance and advancement of modern agricultural biotechnology.”

In this essay, featuring photographs taken by Md. Arif Hossain, we explain what Bt brinjal is, why it is needed and how it is improving lives.

Brinjal (eggplant) is an essential part of Bangladeshi cuisine and one of the country’s most important vegetable crops.

Around 150,000 smallholder Bangladeshi farmers grow brinjal, each cultivating an acre or less of land.

They all struggle to control the fruit and shoot borer (FSB) pest that devours their crop.

The fruit and shoot borer infests the brinjal fruit, making it inedible and unsellable.

To slow the pest, most farmers in Bangladesh spray pesticides every 2-3 days, or as many as 100 times during the growing season.

Many of the pesticides in use in Bangladesh are banned in the West for health reasons.

Bt brinjal is genetically engineered to include a gene found in soil bacteria. Organic farmers also use Bt to control insect pests.

Researchers found Bt brinjal is close to 100% effective against FSB — without the need for pesticides.

Bt brinjal is safe for human consumption and better for the environment.

Bt brinjal has increased yields by 30% and the crop often gets a better price in the market.

As a result of better prices, higher yields and lower pesticide costs, Bt brinjal farmers are seeing a six-fold increase in income.

BARI, a Bangladeshi public research institute, developed Bt brinjal. Local farmers can save and share seeds of these improved varieties.

Tens of thousands of farmers are now growing four varieties of Bt brinjal in Bangladesh, with more adopting it every year.

Bt brinjal has made Bangladesh a pioneer in improving the lives of smallholder farmers and its environment through the use of modern biotechnology.