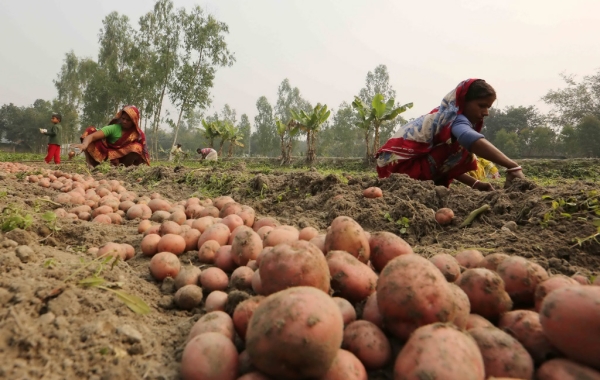 With 10 million tons of yearly output, Bangladesh ranks 7th among top potato growing nations in the world. The country has now an exportable surplus of over two million tons of potatoes after meeting annual domestic requirements.

But each year thousands of farmers who grow the tuber crop in over one million acres of land in the country spend up to a fourth of their investments on fungicide sprays to fight late blight, a deadly fungal attack that damages 20 percent of the potato yield in Bangladesh.

Good news is that Bangladesh finally allowed its scientists to import two blight resistant (RB) potato lines, developed at the Michigan State University (MSU), and go for a field trial. Once approved for commercial release, the RB potato will be the farmers’ answer to tackle late blight disease, thereby saving them about Tk. 100 crore which is spent on fungicides.

Dr David Douches, who heads the Feed the Future Biotechnology Potato Partnership, a US government food security initiative, Bangladesh is going to get in hand, later this month, the two resistant lines out of 10 best blight resistant potato lines developed at MSU.

He said, “Single gene gives some resistance, but potatoes still require some fungicides while double resistance can still be overcome by the late blight pathogen. But, multiple genes insertion in one potato variety provides stronger, longer lasting resistance.”

He said lab and greenhouse facilities, in accordance with Bangladesh's biosafety protocol, have already been put in place at Bangladesh Agricultural Research Institute (BARI) in Gazipur for the purpose of research and development of blight resistant Diamant potato variety in the country.

Yellow-skin high yield potato – Diamant – is most popular in Bangladesh.

Potato late blight, caused by Phytophthora infestans, a microorganism, is the most economically important disease worldwide, responsible for up to six billion dollars of potato loss annually.  Blight was a major culprit in the 19th century Irish and European famines. Potato is the 3rd most consumed food after rice and wheat in the world.

The Biotechnology Division of BARI is working with MSU to develop a late blight resistant 3R-gene genetically engineered potato variety. Till now 10 3R-gene lines events have been selected as late blight resistant and were evaluated at confined field trials by MSU to see the efficacy against the microorganism responsible for late blight disease in potatoes.

The best performing GE lines – DIA-MSU-UB #1 and DIA-MSU-UB #2 will be imported to Bangladesh for continued confined field trials.

Bangladesh apart, the RB potato is being field tested in Indonesia under the same initiative by the Indonesian Agency for Agricultural Research and Development (IAARD).

Asked how soon farmers in Bangladesh may expect the resistant variety, they said, the product will go for a greenhouse trial in 2021, single location field trial in 2022 and multi-location trials in two subsequent years before regulators give the release approval.

If no other GM crop is approved by then in Bangladesh, the RB potato will be the second one after the country’s first GM crop release – Bt brinjal – in 2013.